About Us
|
The Community Room
|
Testimonials
|
News and Events

The caring and experienced professionals at Community Funeral Homes are here to support you through this difficult time. We offer a range of personalized services to suit your family’s wishes and requirements. You can count on us to help you plan a personal, lasting tribute to your loved one. And we’ll carefully guide you through the many decisions that must be made during this challenging time. 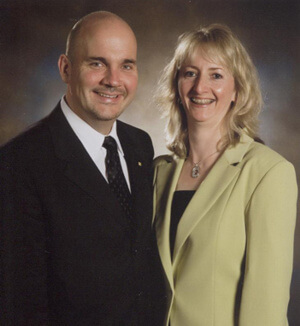 We have been in the Funeral Business for over 25 years. Together with our staff we have been assisting families in the funeral business for a combined total of well over 100 years.

Dwaine was born in Toronto and cottaged in the Haliburton Highlands for many years. In his teens, Dwaine had a good friend die, and this was an introduction to a career in the Funeral Industry. Dwaine met his wife Lori in Gravenhurst, Ontario where she worked as a floral designer. In 1990, Dwaine and Lori purchased the Fawcett Funeral Home, "Bryant & Cameron Chapel," in Coboconk, Ontario.

Later that year, the Lloyds were in Haliburton for a funeral. Dwaine was amazed that there was no funeral home in the town of Haliburton and that families had to drive quite a distance to a neighbouring town for funeral services. The Lloyds teamed up with Bob and Clara Addison to locate a facility that could accomodate a funeral home, and located the property formerly known as the old Seawind Building. Extensive renovations were completed in 1991 and early 1992, and on May 14, 1992, they opened for business. In June 1995, Dwaine & Lori purchased full interest in the business from the Addisons.

In the fall of 1995, the Lloyds purchased their third funeral home business, the Barr Funeral Home in Gooderham, Ontario. They closed the Gooderham building and brought the business to Haliburton.

We have made many major improvements to our facilities in both Haliburton & Coboconk over the last several years. We are pleased to offer you that warm, comforting environment and professional service you have come to expect from us and look forward to serving you for many years to come.

If you need our services immediately, please call us.
We will begin the process of bringing your loved one into our care right away.